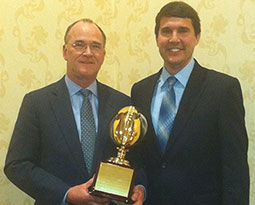 IRVING, Texas – The Cowboys medical staff continues to get recognized, as team orthopedic surgeon Dr. Dan Cooper was named the 2013 recipient of the Jerry “Hawk” Rhea Award, presented annually to the most outstanding NFL team physician.

The announcement comes just days after Cowboys associate athletic trainer Britt Brown was named the winner of the NFC’s assistant trainer of the year award.

The award won by Cooper is selected by the Professional Athletic Trainers Society and is named for Jerry Rhea, who was the head athletic trainer for the Falcons from 1969 to 1994. Rhea then worked as Assistant to the President of the Falcons until 2001.

Cooper’s been the head physician for the Cowboys for the past 13 years and has been affiliated with the team since 1992. He’s the senior partner of arthroscopic surgery and sports medicine at the Carrell Clinic in Dallas.